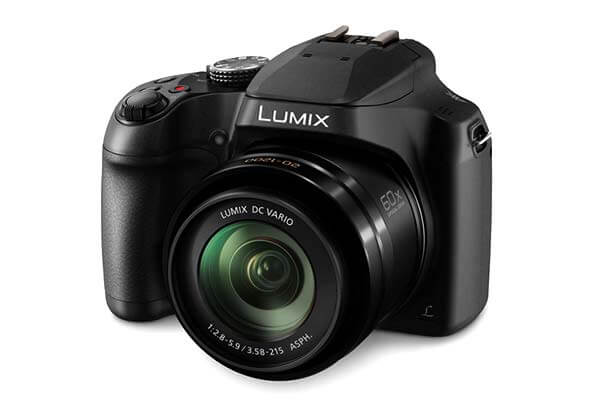 Mixing long-zoom capabilities with multimedia recording versatility, the Lumix DC-FZ82 from Panasonic pairs an expansive 60x zoom lens with high-resolution stills and 4K video shooting functionality. Revolving around an 18.1MP High-Sensitivity MOS sensor, the FZ82 has a top sensitivity of ISO 6400 for working in low-light conditions as well as a 10 fps shooting rate and UHD 4K/30p video recording at 100 Mbps. The 4K capabilities are extended to stills applications, too, and allow for 30 fps shooting at 8MP as well as the ability to use Post Focus for choosing your specific point of focus after shooting. Complementing these imaging assets is a Lumix DC Vario lens, which provides a 20-1200mm equivalent focal length range, along with POWER O.I.S. to minimize the appearance of camera shake for sharper handheld shooting.

Benefitting these performance attributes is an ergonomic body design that incorporates both a 1.166m-dot electronic viewfinder, for eye-level monitoring, as well as a 3.0" 1.04m-dot touchscreen LCD for intuitive control of shooting settings. Built-in Wi-Fi is also featured for wireless image sharing and remote camera control from a linked smartphone or tablet.

An 18.1MP 1/2.3" High-Sensitivity MOS sensor helps to deliver fast overall performance and notable image quality to suit working in a wide variety of conditions. A top sensitivity of ISO 6400 supports working in difficult lighting conditions, and the shutter also affords a quick 10 fps shooting rate at full-resolution with the mechanical shutter as well as 30 fps shooting at 8MP using the 4K Photo modes.

The lens' already impressive optical zoom range can be effectively doubled through the use of Intelligent Zoom, to achieve a total magnification of 120x. Extra Optical Zoom (EZ) settings are also available, which crop into the image to generate a narrower field of view, in order to produce 84x and 122x zoom magnifications at 9MP and 4.5MP resolutions, respectively. Standard digital zoom can be applied as well to, again, increase the effective zoom range by 4x.

4K Burst: Just as with video recording, this mode will allow you to continuously record 8MP images at 30 fps for up to 15 min, making it ideal for instances where you need a fast frame rate in order to capture the best moment.

4K Burst (S/S): This mode most closely follows the 4K video recording process, and allows you to playback your video, pause at the chosen moment, and use the shutter button to mark a chosen frame from the video and save it as a single 8MP frame.

Another attribute of the 4K capabilities is a unique focusing method called Post Focus. This function records imagery as a 4K MP4 file at 30 fps and shifts the specific point of focus throughout the burst shooting in order to offer a range of distinct focusing ranges to choose from. During playback, via the camera's touchscreen, you can then tap the specific region of the image you wish to be in focus and an 8MP JPEG file will be created. Multiple individual files with different points of focus can be created from the original burst, and focusing assist functions can also be used to gain even more precise control over the specific in-focus region.

A built-in focus stacking feature lets you program the capture of a sequence of photos with shifting focus. This technique allows you to utilize the highest performing aperture as well as increase the depth of field in your final image.

A built-in pop-up flash is available to produce additional illumination when working in low-light conditions. A hot shoe is also featured for working with an optional external flash.

Built-in Wi-Fi allows you to pair the FZ82 with smartphones or tablets running the Panasonic Image App for wireless image transferring and remote camera control.

Benefitting manual focus operation, focus peaking is available that highlights bright edges of contrast with a colored outline for quickly recognizing your focus point, as well as Touch MF Assist for touch-to-focus operation.